Airboats are most commonly found in rivers, marshes and shallow waters along the Gulf Coast States in the USA. However, they are also popular throughout the world as they are excellent watercraft for calm shallow waterways and can also used in icy areas around the world, from Nebraska to Siberia. But, how do these unusual boats work?

Airboats do not have an outboard engine or rudder like most other boats. They have no mechanical parts below the water surface and are propelled by a large fan at the back of the boat. They are steered via rudders behind the fan that deflect the air left or right via a stick controlled by the driver.

What is an airboat

An airboat is a flat-bottomed boat propelled by a large onboard fan. As a watercraft they are used almost exclusively in inland shallow waters from rivers to marshes and lakes. However, they are not limited to water usage.

Airboats are also popular in icy areas, such as Siberia, because their flat-bottom hull design and lack mechanical parts under the boat makes them perfect for gliding across large sheets of ice.

Traditionally an airboat fan was powered by either an aeroplane engine or road vehicle engine depending on the size of the vessel. Many airboats, especially homemade ones, are still powered this way today though there are manufacturers who specialize in airboat engines.

If you want to know more about how an air boat is used and the history of the airboat read this article. 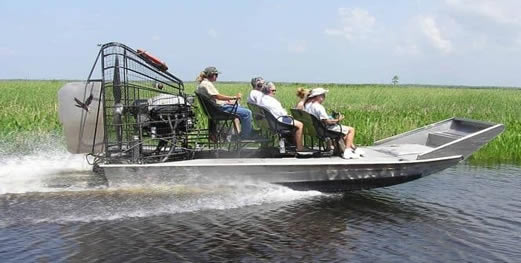 Originally airboats were powered by a small airplane engine but are now more commonly powered by an automotive engine.

The first airboat ever made in 1905, by the inventor Alexander Graham Bell, used an aeroplane engine.

These days though you can buy a engine made specifically for an airboat such as those from Marine Power.

The engine powers the fan at the back of the boat which is responsible for creating the thrust that drives the boat forward. This is a completely different method of propulsion than that used by conventional boats.

An average boat is moved via the dispersal of water at the back of the boat, say through an outboard engine that powers a propeller in the water. Likewise, when using manual propulsion methods it is the dispersal of water that pushes the boat forward (or backward if you paddle or row that way). With a sailing boat the sails gather up wind and the wind pushes the sails, and thus the boat, forward.

An airboat works in a completely different way.

Unlike mechanical or manual propulsion via water displacement, or sails which gather wind, an airboat pushes air away from the boat. By pushing air behind the boat the attached fan creates the thrust needed to move the vessel. Think of it is terms of a giant high-powered desk fan that is pointing away from you instead of at you.

Because airboats are powered by a fan there are often referred to as fan boats or fanboats. At the back of an airboat inside the huge fan there is an aeroplane-styled propeller that creates the air flow. This propeller forces air behind the boat pushing the boat forward.

As there are no mechanical parts underneath the boat, and because it has a flat bottom, airboats almost glide across the water.

Due to the power of the engine and the large propeller in the fan, airboats are also capable of very high speed.

Airboat propellers are not uniform in shape and size and come in all different kinds but will almost always resemble an airplane propeller.

As we have seen, most types of boats are powered either mechanically with an outboard engine, or manually with paddles or oars etc., or by the wind via sails.

When under mechanical or sail power these boats are usually steered by a rudder, or propeller, that sits in the water at the back of the boat.

When under manual power a boat is usually steered by the same mechanism used to propel it, i.e. if using a paddle or oar you propel the boat with it and also use it to steer the boat.

However, as an airboat is propelled by air generated from a giant fan, and because it has no mechanical parts under the waterline, a different mechanism for steering the boat is needed.

Just as air is used to propel the boat forward, it is also air that is used to steer the boat.

You turn an airboat by manipulating the air stream that is being generated behind the boat.  This is achieved by moving the stick control right or left in order to deflect the airstream in either direction.

The stick control is connected to rudders at the back of the boat which are responsible for deflecting the airflow that is being generated by the propellor in the fan. It is a simple but very effective method for steering the craft. An airboat, like every other boat, has no breaks, so stopping one takes some practise and a bit of skill.

An airboat is not capable of stopping abruptly.

An airboat cannot go in reverse either.

To slow down the boat the driver must reduce the throttle well in advance of when he/she wants the boat to stop.

Most common uses for airboats

Airboats are very popular for use in the Everglades in Florida and the swamps of Louisiana due to the shallow draft of the boat and the calm nature of the waters. Likewise, their shallow draft means airboats are also used for hunting and fishing in shallow and calm waters.

In large parts of the Everglades and the swamps of Louisiana, for example, the waters are very shallow and it would be difficult for other powered boats to gain access to those areas. Although kayaks, canoes and Jon boats are also popular in these areas each of these boats requires manual propulsion to be employed in the very shallow water areas where an outboard motor cannot be used. This for many boat owners is far from ideal.

Hunters, anglers and those transporting goods and people, not to mention the boats used in the huge tourist trade, could not perform their activities effectively if they were reduced to the slow speeds offered by manual propulsion methods. Airboats offer a safe, efficient and fast way to navigate these very shallow waters. But of course airboats are not restricted to just water.

The flat bottom hull design, with no mechanical parts under the waterline, makes airboats an excellent choice for traversing large icy areas as well as shallow waters. This mean airboats are popular in places that experience a lot of ice for long periods such as Siberia and Canada.

How fast do fan boats go?

Most commercial and privately owned airboats are restricted to about 40 mph speeds but some larger boats are able to hit 50 mph. However, many waterways have strict speed limits that airboats have to adhere to, so you may not experience those top speeds.

Racing airboats can go considerably faster than average commercial boats reaching speeds of up to 130 mph. The National Association for Airboat Drag Racing (NAADR), founded in 2012, hosts between 5 to 7 airboat racing events each year that start in January and end in October with the championship race.

Airboat drag racing has come a long way since it first started when rules and racing classes varied widely from race promoter to race promoter. It was Brad Hendry who had the idea of founding the NAADR in order to create a uniform set of rules and classes for racing.

There are usually between twenty to thirty airboats racing per event and it is growing in such popularity that spectators will travel from as far as the West Coast to see the races.

Due to the growth of the sport many innovations have sprung up with new boat designs hitting the scene all the time. Racing boats come in all sizes and types of construction material with hulls made from wood to fibreglass and some even have homemade propellers and fans.

To learn more about airboat racing read our article Exploring the World of Airboat Racing.

Longest Journey on an Airboat

The longest journey on an airboat took a whopping 13 days.

Two Americans, Bill Fadeley Jr. and Eugene Hajtovik completed a 1,100 mile airboat trip along the Intracoastal Waterway from Jacksonville, Florida, to the Statue of Liberty in New York, on a 16 ft 350 HP airboat called “Miss Jacksonville”.